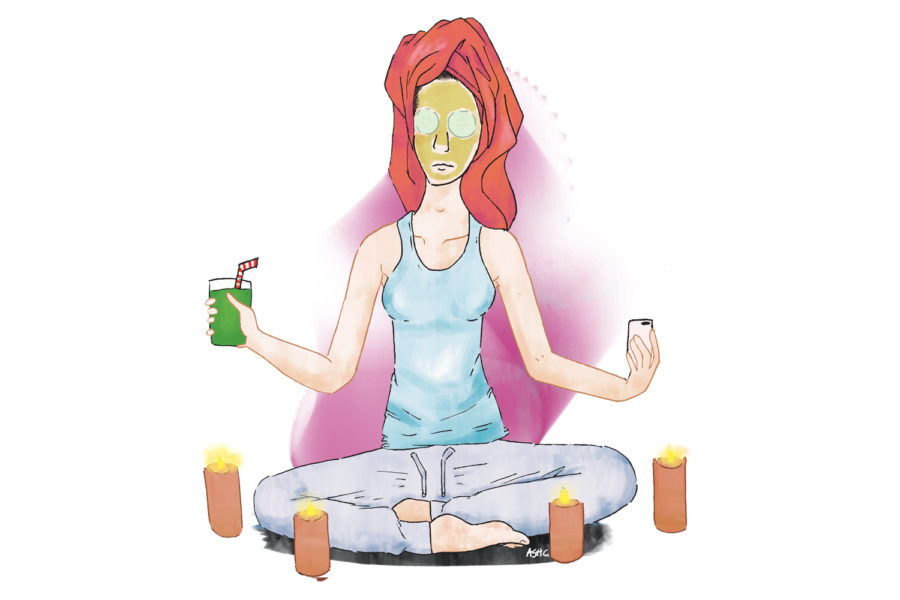 The umbrella of self-care and wellness as it is presented on social media and through marketing seems to be unclear and widespread. Because of this, it is easy to assume that self-care has been repurposed as a marketing ploy.

#SelfcareSaturday. As of late, the hashtag has taken over Twitter and Instagram, becoming more common than the longstanding #MotivationMonday.

The umbrella of self-care and wellness as it is presented on social media and through marketing seems to be unclear and widespread. Because of this, it is easy to assume that self-care has been repurposed as a marketing ploy. Sophomore Raini Birnbaum said that she thinks self-care is about taking the time to evaluate feelings.

“Self-care is making sure that you’re mentally and physically OK,” Birnbaum said. “That could be taking time for yourself or surrounding yourself with people you like.” While the representation of self-care on social media is often prescribed, social worker Meg Scamardo said that she thinks it looks different for everyone. She said that she defines self-care as doing what it takes to feel restored.

“For a lot of people, self-care is just getting rid of stuff, whether that’s getting rid of social media or not having a cluttered lifestyle,” Scamardo said. “It ’s finding whatever it is that allows you to take care of yourself. On social media, I think it seems almost unattainable.”

Birnbaum said that she also thinks self-care is misrepresented on social media. She said that it’s often too simplified and isn’t effective for most people.

“You’re feeling really stressed and feeling really overwhelmed and there are people telling you to do things like yoga,” Scamardo said. “So you look up how much a yoga class is and you don’t know if you can afford that or if you have time for that.”

Sophomore Kelli Waring said that she thinks that students can refer to social media as guidance when they need it but should put more attention on checking in on themselves physically and emotionally. She said that the priority for students who are feeling overwhelmed should be on getting in touch with their feelings.

“Part of self-care is making sure you’re comfortable in situations you put yourself in,” Waring said. “Self-care is deeper than Twitter usually makes it seem.” Scamardo said that while social media can misrepresent self-care techniques, she hopes that students will adjust suggestions they find online to work for them. She said that if students feel that things such as yoga aren’t attainable, they could practice deep breathing.

“I’m a big believer in brainstorming and sharing good ideas,” Scamardo said. “I think it’s helpful in that way.”

Self-care on social media can also be negatively influenced by marketing. Companies such as Gwenyth Paltrow’s Goop promote wellness and self- care while selling expensive products for these purposes. Scamardo said that this can also make self-care seem unattainable.

“(Paltrow is) one of those people that talks about self-care and eating healthy,” Scamardo said. “But my life is not like Gwyneth Paltrow’s.”

Scamardo said that to correct the misrepresentation of self-care on social media, it needs to be portrayed more realistically. She said that if people see examples of more accessible self-care, they might be more compelled to care for themselves in those ways.

“What’s missing is that self-care needs to be real,” Scamardo said. “We miss self-care when we don’t think we’re worthy.”

Scamardo said that a school of thought that incorporates worthiness into self-care is a practice called self-compassion. She said that self-compassion is centered around self-acceptance; when a student is faced with personal failings, it teaches that they should focus on loving themselves in spite of them.

“Self-compassion has us acknowledge that this is just who (we) are,” Scamardo said. “(It’s saying that) life is tough and hard, but I’m doing the best I can and I need to love myself for that.”

Scamardo said that she hopes that students find self-care strategies that work for them, even if they’re not suggestions from social media.

“Sometimes my self-care is going to the restroom to take a break from all the chaos,” Scamardo said. “I hope students find time for themselves.”