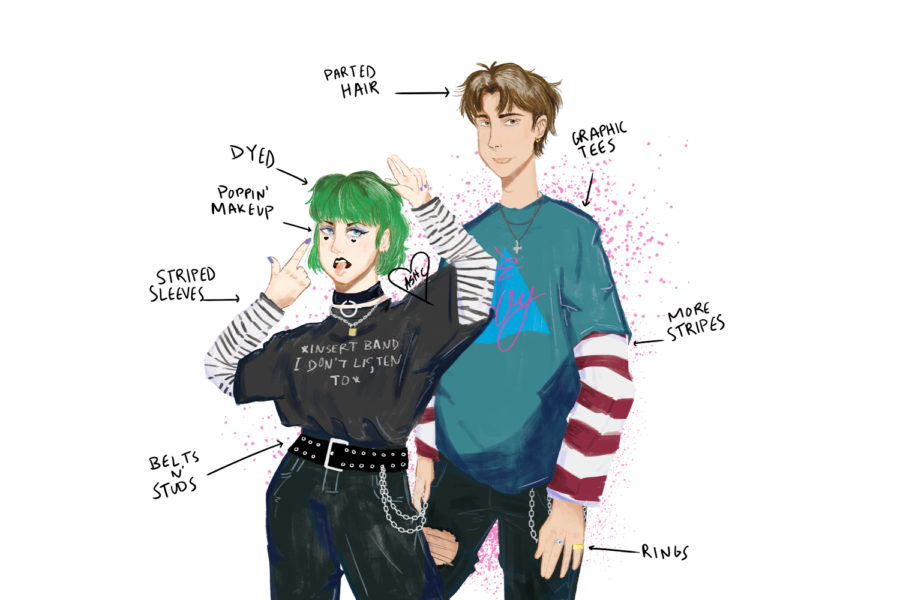 A girl gets pulled in by her collar. A disembodied hand puts hearts under her eyes. She looks scared and confused. Then in one jump, she’s wearing a striped shirt under a baggy black t-shirt with a skirt and fishnets. She has become an e-girl.

A new trend has been on the rise of influencing teenagers everywhere to become e-girls.

“For me personally, it’s a lifestyle,” sophomore Raini Birnbaum said.

Being an e-girl used to be a way to slut- shame famous women on Instagram, but now being an e-girl is known for being a girl who dresses in a 90s emo/skater-inspired way. Typically, you would see these types of teenagers on social media, but the more popular this trend becomes the more common it is to see students at school showing their e-girl style in their everyday outfit choices.

“It’s the type of girl who tries to differentiate themselves by doing bold things that others don’t like to do or won’t do,” Birnbaum said.

Sophomore Dyona Stevenson described an e-girl as someone who likes to dress in a Japanese pop culture look “where they’re sort of anime looking with pigtails, hearts on the cheeks, dress, and usually dark clothing.”

Although there are girls who dress like this, they may not identify as an e-girl. They just like the type of clothing. But there are some girls that intentionally dress this way to show their interest in the e-girl lifestyle.

For example, Stevenson said she sees it more as a fashion trend.

“It’s more what you wear to make you an e-girl it’s more about your appearance.”

Dyona also said that she wouldn’t actually count herself as an e-girl. She only “dresses like one” because she “just likes the style.”

On the other hand, Birnbaum said that “it can be both, but I don’t really think you’re an e-girl if you just dress like that. But for me personally, it’s a lifestyle.”

Birnbaum said she thinks the look is a lifestyle to her because to her it involves having a social media presence.

Being an e-girl is “taking things that you wouldn’t see most people do or wear and you’re doing it,” Birnbaum said. “You have more of an online presence, and you have people look up to you because internet fame is a part of being an e-girl,” she said.

This trend does not only wrap around social media platforms it wraps around fashion as well. This type of fashion typically includes long-sleeve striped shirts, dark clothing, 90’s-style pants, combat boots, and fishnets. Accessories that would complete an e-girl look include scrunchies, eyeliner art on the cheeks, chains, a black belt, and chokers.

Birnbaum said she shops for her clothes at thrift stores, Forever 21, and JC Penney’s. She also shops for her accessories at these stores. However, she also makes her own jewelry sometimes.

Stevenson said she shops for her clothes on an online website called Coco Bye that she found from an ad on Instagram.

Instagram is one main social media platform where e-girls post pictures or videos of themselves showing off their outfits and modeling them.

There is also the app Tik-Tok where you may find many girls that post videos of themselves turning into an e-girl. is has been known as the “E-Girl Factory.”