Baseball boosters upset about lack of access to field 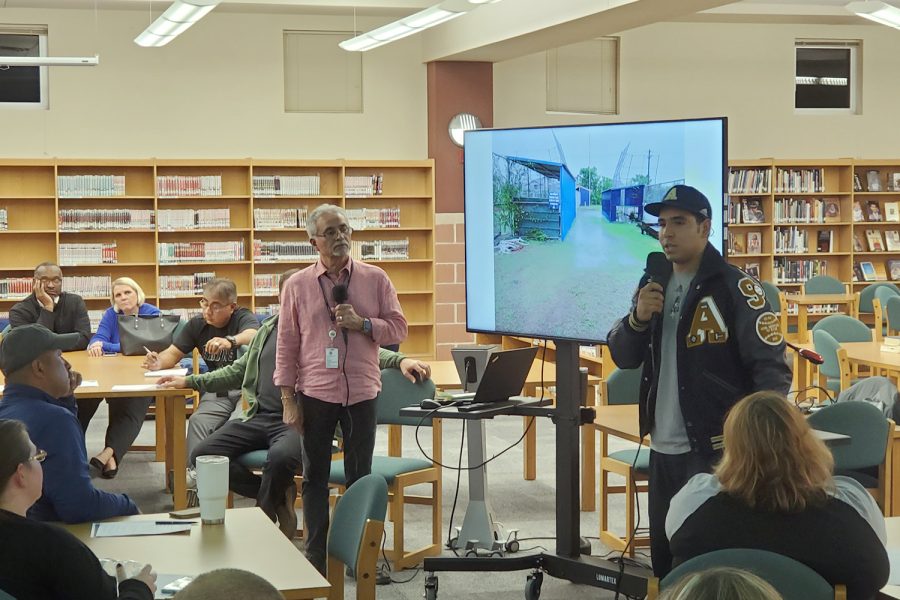 Senior Noah Torres speaks at a special meeting called by the Akins Baseball Team boosters to discuss solutions to get players access to the field after a number of delays.

The Akins baseball teams will likely not have a functional baseball field that they can use to practice or play on until January 17, which is just a couple weeks before they play their first official games in February.

That’s what dozens of parents, players and supporters of the Akins baseball program filled the library to discuss at a specially called meeting of the baseball team booster organization. The boosters asked that officials who work for Austin ISD’s Construction Management Department and athletics department to attend so they could answer questions about problems with the current condition of the baseball field.

The field has been off-limits to the baseball team all year after construction began in the summer to install new irrigation and draining systems that were paid for as part of the bond issue projects approved in 2017. Members of the booster program also expressed frustration with Austin ISD officials and contractors who they said were responsible for damaging parts of the field that they had recently spent thousands of dollars on renovations.

In particular, booster parents were upset about the damage to the pitcher’s mound and the condition of the turf.

“All the people in this room worked really hard to get the money for that so that our kids could have a place to practice that it’s not even comparable to the fields that (opponents) have to play on,” parent Elena Torres-Ponce said.

Jesus Delgado, Austin ISD construction management department project manager, began the presentation with explanations of the various complications that have caused the field to be in bad shape and off-limits to players. He said one of the problems that caused the delay was that a contractor was waved off of the projects at Akins. He also said it was a challenge to get workers to return to work schedule because of a lack of staff.

Parent Rodney Wilk said he was upset because he felt the Akins baseball team was five months behind in training of other teams that they play in district play because of construction delays, mistakes and bad weather.

“Should we just host a wiffle ball tournament in the gym (when they’re supposed to play other schools)?” Wilk said.

He was sure to let Delgado know that he wasn’t at fault for this, the problem being more inherited than a direct effect of the work being done by the contractor and district workers, a sentiment that was not shared by the team photographer Bob Morton.

Morton has worked as the photographer for the Akins baseball team since 2001 when the team was first established.

“My kids used to tell me about kids who would do their science fair projects on the bus because they knew they would have to turn it in that day. This feels like a bus project,” he said. “Because it sat there for a long time until you knew you had to come and address this room.”

Though he did acknowledge that the field had issues itself.

“You inherited a bad field, a field that had problems, that’s on AISD,” Morton said.

He also shared that in the original build of the field, similar issues arose where contractors were dismissed from the project much like they were this time around.

Delgado informed that work would continue this week to only need to complete hydro-mulching, an efficient way of planting grass, by the end of this week or the beginning of next to ensure the field be as usable as possible by the time the winter break ends.

Senior Noah Torres spoke on behalf of the team to convey how they felt about the problem.

“It’s really a feeling of helplessness,” Torres said. “It’s not what goes into a field it’s what comes out.”