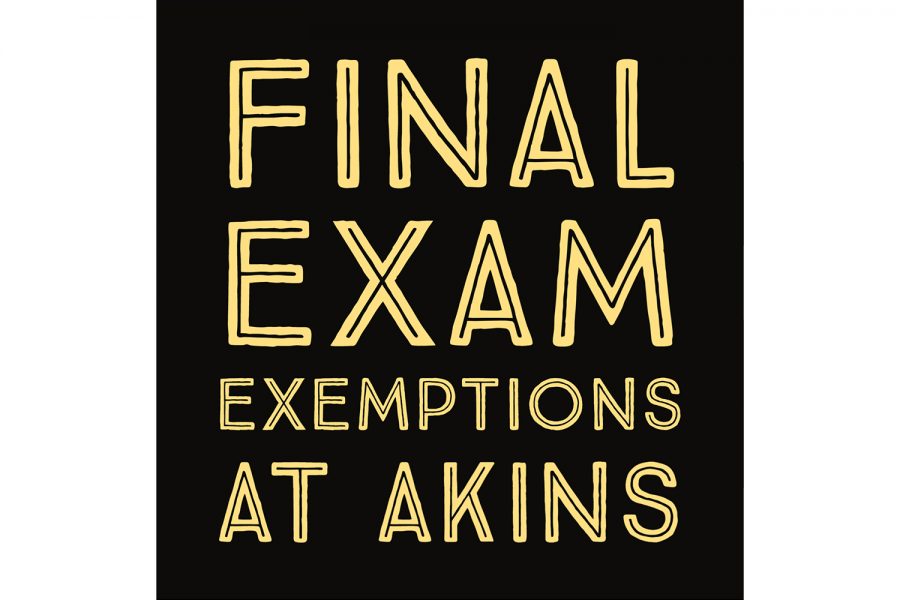 Final exams. Just reading those words causes stress and anxiety levels to rise for most students. However, there might be some relief for Akins students this May.

As students of Akins returned to school after Christmas break teachers and staff had informed the students that they could be exempted from final exams. Students became very interested in this conversation. Junior Karen Perez said she was very excited about this new opportunity.

“I already have good attendance and I’m already trying to have average grades,” she said. “And I was like this is just going to put other people in the mindset that ‘Hey, even just (an 85) average can actually get you some really good things.’”

Students who take regular classes have to have a total average grade of 85 from all three 6-week-grading periods for a class. Besides this, students will be required to have no more than three absences. If a student has more than that limit of unexcused absences then they will be ineligible for the incentive program.

“I would just like an extra day. Like maybe the number of days missed being four or five. At least one or two more. I got really sick a week or two ago and I still came to school kept up my work and I’m still passing all of my classes and it’s just one absence,” Perez said.

AP classes have had the most attention and frustration from the students because although the absence policy is still the same, students who attend those classes have to have a 90 grade-point average instead.

Principal Tina Salazar made a video to announce the final exemption policy to all students.

In the video, she explained that students in AP classes have to have that average of 90% because “the school is held to a higher standard by college board”.

“We are going to continue to hold the high standard to all AP courses to a 90 because our surrounding schools do the same, and it is the right thing to do,” Salazar said.

Although students can be exempted from their finals they still have to show up to school. If a student does not show up to class they get an automatic zero for their final exam grade, which counts for 25 percent of their semester average.

Junior Leanne Al-Sayyed, who attends Westlake High School, said the expectations for students there are different.

“In my school, we get a maximum of two exemptions per semester, the classes one chooses to exempt must have an average of 88 or higher as well as near-perfect attendance for that same class,” Al-Sayyed said.

Al-Sayyed said the exemption policy there has been helpful because studying for finals in eight different classes can produce high levels of stress and anxiety.

“Students during finals week have so much on their plate that exemptions help them find time to study for fewer tests, and overall be more healthy,” she said.

Perez said the exemption policy would provide a good incentive for students to work hard through the school year instead of just cramming at the end.

“Yes, there is a lot of pressure but I think if you just push yourself to come to school more often it’ll be fine,” she said. “I mean your friends are here and learning isn’t that bad.”