Akins’ Salek is named AISD teacher of the year 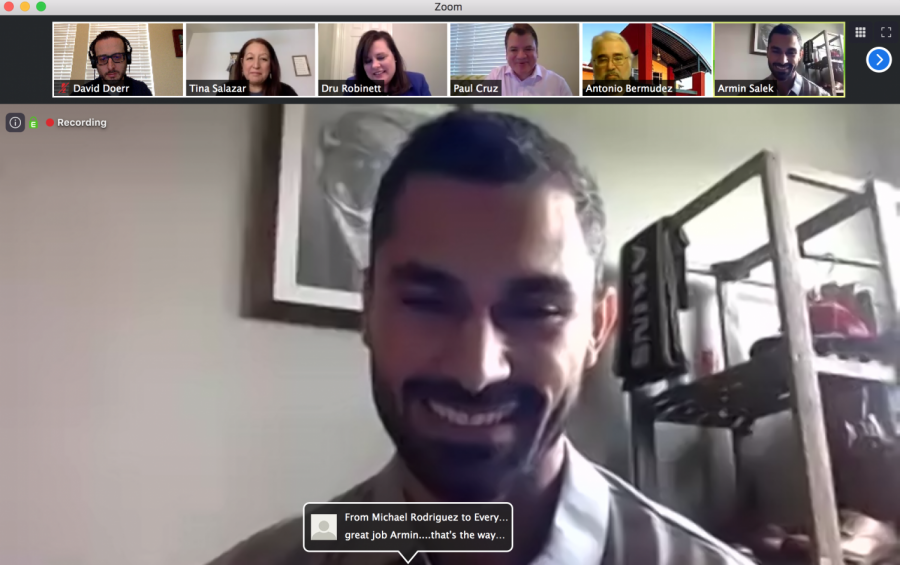 Akins law teacher Armin Salek was surprised in a Zoom call Friday morning when he was named the Austin school district’s high school teacher of the year.

Akins law teacher Armin Salek was surprised in a Zoom call Friday morning when he was named the Austin school district’s high school teacher of the year.

A few minutes after 10:30 a.m., boxes with teachers’ faces started popping into a Zoom meeting called by Akins Principal Tina Salazar. It seemed like a typical remote faculty meeting at first until some started commenting in the chat screen that the number of participants was more than a typical faculty meeting. Besides Ms. Salazar, the district’s superintendent Dr. Paul Cruz, school board trustees, and other district officials were on the call, too, making the meeting seem even more unusual.

And then came the big announcement. Mr. Salek was Austin ISD’s High School Teacher of the Year, which is the district’s top annual award for high school teachers. Cruz started ticking off some of Salek’s many accomplishments in the short number of years he has been a teacher at Akins after starting in the fall of 2017.

These accomplishments include expanding the mock trial team to four teams, giving the Legal Eagles the opportunity to attend the Texas Criminal Defense Lawyers on Forensics, leading the Akins mock trial team to be 1 of 3 teams representing the State of Texas at nationals in Chicago, allowing students to have more CLE (Continuing Legal Education) hours than most attorneys, and providing the Legal Eagles the opportunity to meet with exoneree Jason Baldwin of Memphis Three.

Superintendent Dr. Paul Cruz said, in a post on the AISD website, “During this time, it’s more important than ever to recognize our teachers for their hard work and heart work in preparing our students for college, career and life.”

Salek said he was surprised and proud when he found out.

“It was intimidating and an incredible honor to find out that I was selected as the High School Teacher of the Year,” he said. “I felt both immensely proud to be selected and scared that the distinction is more than I deserve. I work with countless talented teachers on a daily basis, so it makes it that much more meaningful.”

He notified the Legal Eagles students through a Remind message.

Junior Basma Zanjeel, a member of the Legal Eagles, said she found the announcement heartwarming.

“I read his Remind message and I just immediately smiled because I knew it was no surprise he would win such a thing,” she said. “He’s so hardworking and dedicated to his job and students that he most definitely earned this award.”

Salek said the award would greatly benefit him.

“This is obviously a huge step forward in my career, and hopefully a step forward for Austin ISD,” he said. “My goal is to make Austin ISD the leader in high school legal education. I want to help establish legal aid clinics at schools across the District, and I take this as the administration saying that they are interested in joining me on that mission.”

“Salek was the only teacher I could go to for advice during my high school years. He cares so very much about every one of his students,” she said.

Salek, who is also a practicing attorney, became a teacher because of the influence of his mentors in life.

“The awards I receive are a reflection of the opportunities that they provided to me and the examples they set,” he said. “I’m working hard to see if I can provide similar opportunities and examples for my students.”

Sophomore Isaias Balderas said that he appreciates what Salek has done for him at Akins.

“He truly is a one of a kind teacher,” Balderas said.