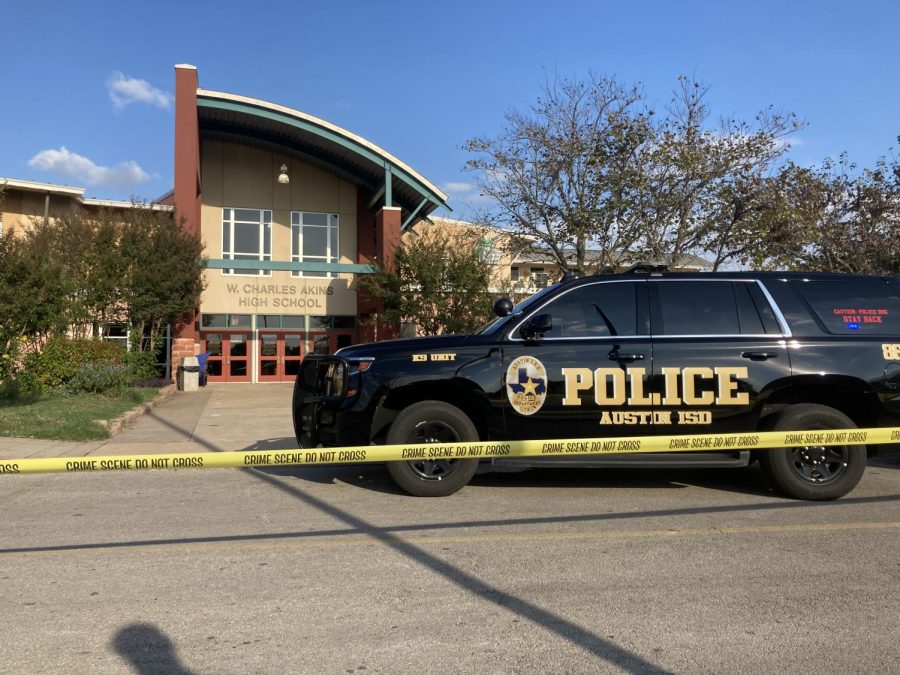 Austin ISD Police cordoned off the main entrance of Akins Early College High School Thursday afternoon as they investigated an incident in which a student was hospitalized and another student was apprehended into custody. Austin ISD police also investigated threats toward the campus that circulated on social media Thursday evening. Austin ISD police said the social media posts appear to be circulating across the country with the school name and date changed. The police department said additional officers would be on campus on Friday out of an abundance of caution.

“Officers responded to @AkinsAISD on a report of a distubance with injuries. Scene is safe at this time. One student was transported to the hospital. One subject is in custody.”

Akins Principal Tina Salazar sent the following message to parents around 5:50 p.m. to provide what information could be publicly released at the time.

About 4:05 p.m., during an altercation between two students on campus, one presented a knife and injured the other. A teacher alerted security, who responded immediately.  The injured student was transported to the hospital via EMS, and the student with the knife was apprehended into custody.

Austin ISD takes violence of any kind very seriously. Fighting or weapons at school are not tolerated and will be dealt with immediately.

We encourage our community to report fights or threatening behavior of any kind to Austin ISD police at 512-414-1703 so they may investigate and we can work together to keep our campus safe.

If you have any questions or concerns, please do not hesitate to contact us at 512-841-9900. As always, thank you for your support of Akins ECHS.

After the incident, social media posts have circulated alleging threats made toward the school. Austin ISD police and campus administration have said they are aware of the posts and are investigating. They said additional officers will be on campus on Friday as a precaution.

Austin ISD  police made the following statement on its Facebook Page:

“We’re aware of a school threat on social media that is affecting the Akins HS community. This threat has been circulated nation wide with the school name and date changed, and is unrelated to the incident that occurred today. Extra officers will be on campus out of an abundance of caution.”