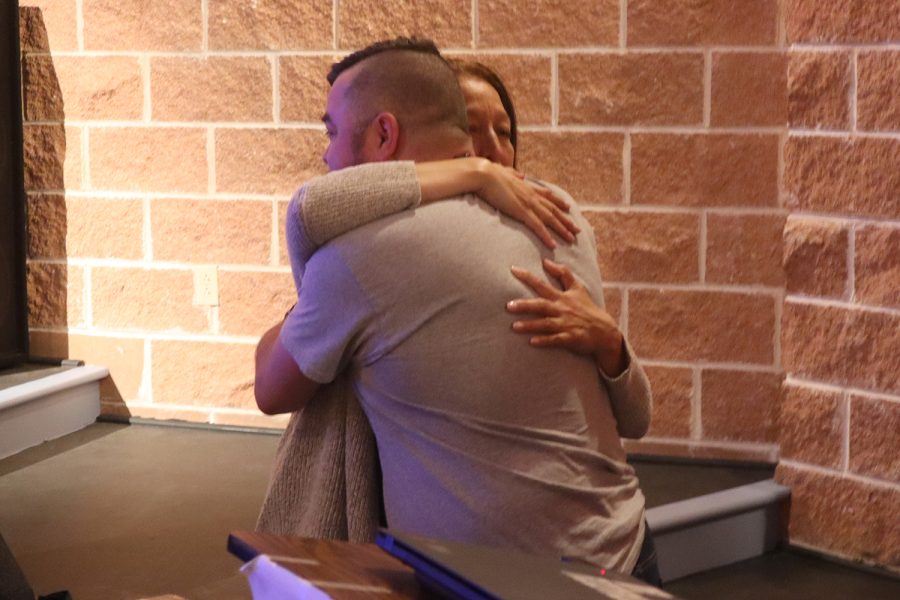 English teacher Alan Brooks gives Principal Tina Salazar a hug after she announced that she would be leaving Akins to become the principal at Hays High School.

After leading Akins for four years, Tina Salazar announced today that she was selected to serve as the principal of Hays High School and will be leaving this summer.

Salazar, who has served as the Akins principal since 2018, made the announcement during a faculty meeting that was called after final exams ended on Tuesday. Salazar, who has worked at Akins for 14 years, said Akins is a very special place and that it was a hard decision to make.

“I love you all,” she said to Akins faculty and staff. “Sometimes I don’t get to communicate that to you, but it’s true. And when I say things, like ‘I see you,’ I do. This stuff isn’t easy? It’s not and the work that you do here matters. It really does because the majority of our students do not have the resources necessary to get to the next level — whatever that is. Whatever that next level is, you are the reason they graduate from high school and get a certification, then go to college.”

Before serving as Principal, Salazar had worked at Akins in various roles, including as a teacher, instructional coach, department chair, assistant principal, and an academy director. She had 21 years of classroom experience before she became an administrator at Akins.

During her tenure she oversaw the campus’ COVID-19 response, including the transition to remote learning and then back, again, to in-person classes during this school year.

Salazar said the principal position at Hays High School was the only position she would consider leaving Akins for. Salazar, who already lives in Kyle, said the school is only a five-minute drive from her house. She said she is excited about the opportunity to give back to the community where she has lived for the last 14 years.

Salazar said she will be be the first person from a minority background to serve as princpial at Hays High School.