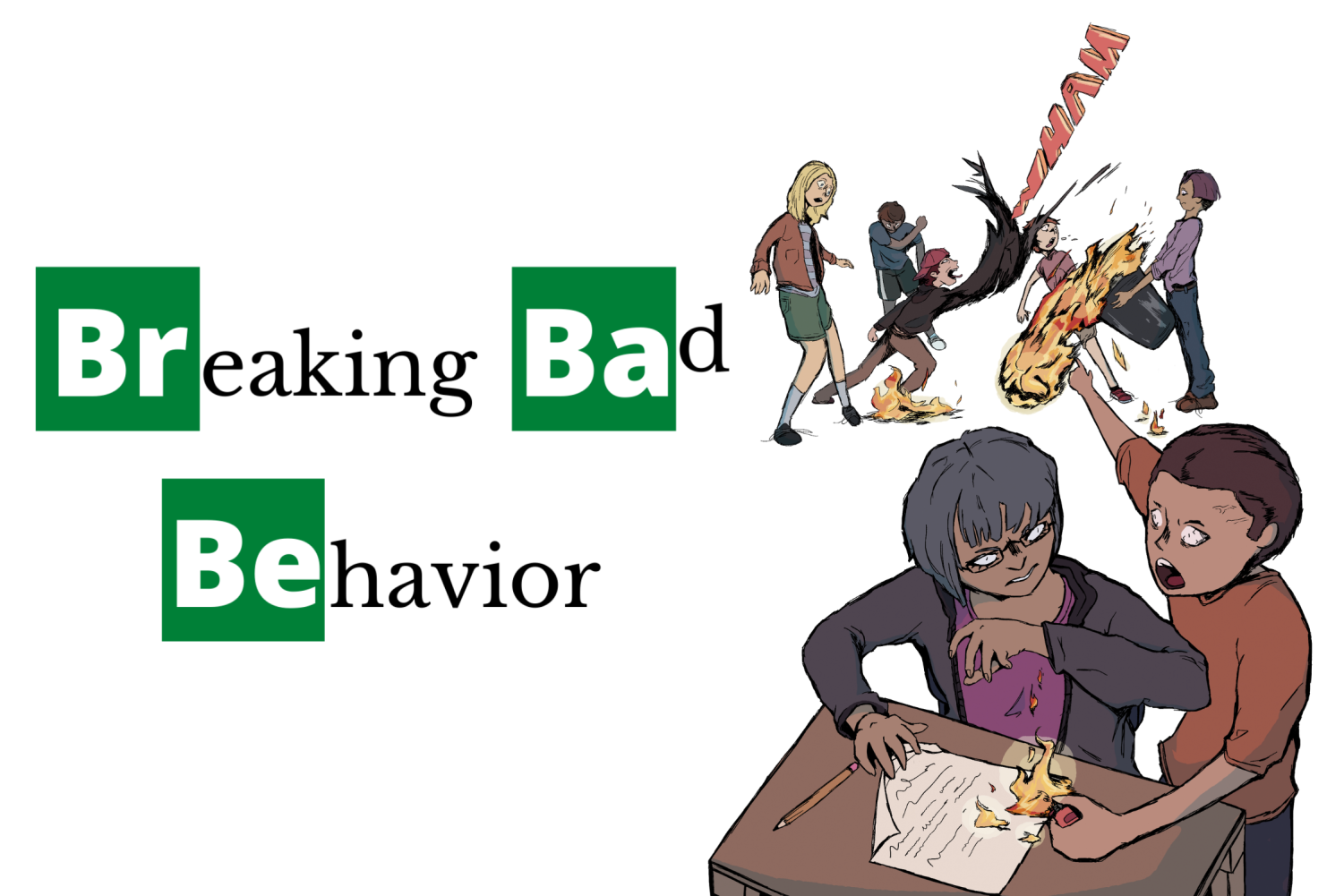 Some examples of what is happening on our school campus. (Charles Sacco)

Some examples of what is happening on our school campus.

All of these aggressive and destructive student behaviors have seen an uptick in incidents since the beginning of the school year. Aggressive and destructive behavior seemed to be at its worst point in late October with a trash can fire in a bathroom on Oct. 19, a student stabbed by another student in a fight on Oct. 21, and a day of low student attendance on Oct. 22 because of unsubstantiated online threats that spread on social media the night before.

Fights between students, especially underclassmen, during the first weeks of school is a common occurrence during most school years, but they usually die down. This year, the level of fighting and overall aggressive behavior between students seems to have lasted longer than that typically brief period of time.

Akins staff and administrators point to the last 18 months of quarantining and remote learning as a primary factor in this abnormal increase in aggressive behavior at Akins. They say it has slowed teens’ social development and increased their stress far above healthy levels. An anonymous student stated, “I feel like none of us are socializing properly after not being together for so long, a lot of us are not acting right.”

Why is Akins facing this change of behavior?

The pandemic has affected everyone’s mental health to some extent. Students are still learning to readjust to being back on campus for in-person learning. Margaret Kozel, a campus-based licensed social worker who runs the Student Support Services program at Akins, has an explanation to the reasons behind students’ actions while facing conflicts.

“A lot of it just has to do with our brain, which is not fully developed until we’re in our mid-20s or early 30s,” she said. “Thus that front part of our brain, which enables us to rationalize and think logically, is underdeveloped. As a result, we react and cope with things, in ways that can be unhealthy and particularly dangerous.”

Kozel said that students have been choosing to use their fight response, whether it is physical or verbal because students get easily caught up in the moment.

Another aspect to consider is how the class of 2022 is the only one to have experienced a complete year on-campus. Principal Tina Salazar said that Akins has seen a lot of unresolved issues that come from middle school or situations that were made worse by the pandemic.

“That’s hard on kids because if you’ve never been here, you’ve never really known what it’s like to be on a high school campus that offers you this freedom,” Salazar said. “So it’s hard trying to transition students (back to in-person learning).”

Junior Bianca Barem said she doesn’t believe it is fair to place the blame on any single grade level.

“Lower classmen are thought to be the more rowdy ones, but it seems like it’s pretty even between lower and upperclassmen this year,” she said, “When there’s a few fights throughout the year, as expected of typical teenagers, most are either unbothered or entertained by it. With the frequency of fighting and everything this year, it’s just annoying and disheartening. It’s become irritating to see this level of immaturity even for high school-aged students,” Barem said.

People like to start drama from behind their phones. I’ve been included into online drama by students here, due to the way our friendship ended before the covid break.”

And in fact, from March 12, 2020 (the day classes were canceled because of the pandemic) to Aug. 17 of this year, (the first day of the current school year) a lot of things happened, not just on social media, but in our communities. To some extent, all students were not allowed to deal with the things that affected them. It is hard to do so when you have to stay home for so long.

Therefore It is important to get everyone mentally, emotionally, and socially prepared to cope with high school stress.

Junior Alyna Sharkozy said she believes that struggling students can get trapped in a “vicious cycle.” When students don’t know how to properly handle high school stress they can be more likely to get involved in fights to subconsciously release that stress. However, these violent actions only generate more tension, stress, or even anxiety, Sharkozy said.

“There are so many fights at Akins, it’s just really tiring seeing them all of the time and hearing threats directed to the school. It has affected my school experience because it’s just stressful knowing that there will be a fight or another threat directed at the school,” she said. “Kids setting fires in our school and stealing toilet paper just shows those immature activities that the kids at Akins continue to participate in.”

How is bad behavior affecting the school environment?

On Oct. 22, the day after a student was stabbed and unsubstantiated online threats circulated on social media, student attendance was down by about half of the normal rate. Students said they were afraid to come to school because of the online threats, which turned out to be fake, and the stabbing incident, which is considered a very rare occurrence at Akins. Some students said it was upsetting because they had never feared coming to school until that day happened.

“I’ve been worrying for my friends and my own mental state. And just a fear I never had before coming to school,” sophomore Sofia Greene said.

However, the academic pressure is still there. Senior Ethan Fernandez said he was scared for his own safety after the online threats were spreading on social media. Yet, he was still conflicted about missing important tests that were scheduled for that day.

“I was at a point where I was like, I should miss school, but I can’t miss my calculus test,’” he said. “And I know a lot of friends that didn’t go to school that day. They missed tests, assignments that were due,” he said.

What are the school’s actions to keep students safe?

The school administration has stepped up its efforts to be more visible in the hallways and aware of what activities are going on in the bathrooms, which have been a major hub of vandalism and bad behavior on campus during the fall semester. Administrators have set up tables and work areas right in the middle of the hallways instead of working out of their offices.

Teachers have been told not to let anyone outside of a classroom without a pass at all times, and actions such as not allowing students to dress up for Halloween on Friday before Halloween were attempts to prevent contraband, and keep students from being able to hide their identities.

The implementation of required tardy passes in the morning and during tardy sweeps. is another way the administration is trying to cut down on students walking around in the halls and getting into trouble. Students have had mixed reactions to the increase in security presence in the hallways with some saying it helps and others saying it adds to their feelings of stress and anxiety.

Kozel said she understands that some students don’t appreciate why the administration is becoming more strict in controlling student behavior in the hallways.

“It may seem unnecessary to some students, but that’s about setting boundaries and making sure our students remember this is school and you’re here to learn,” Kozel said. “You’re supposed to be in class. So if you’re in the hallway, make sure that you have a pass, even when you’re going to the restroom, or if you’re going to another classroom, even if you’re coming to SSS.”

Principal Tina Salazar said that the administrators are in the hallways more because they realize students need more help than ever before, and not necessarily in a disciplinary capacity.

“We’re rotating our teams to be in the hallways to just make sure that everyone’s safe, and get more one-on-one time with students to make sure that students know us and we know them,” Salazar said. “Not just for safety, but to build relationships, because we missed that community part.”

Another thing we can expect to see soon or sometime later this school year is a public art wall for students. Staff and administrators believe that some of the graffiti that has occurred in the restrooms is in some ways a coping reaction from being isolated so long at home last year during remote learning.