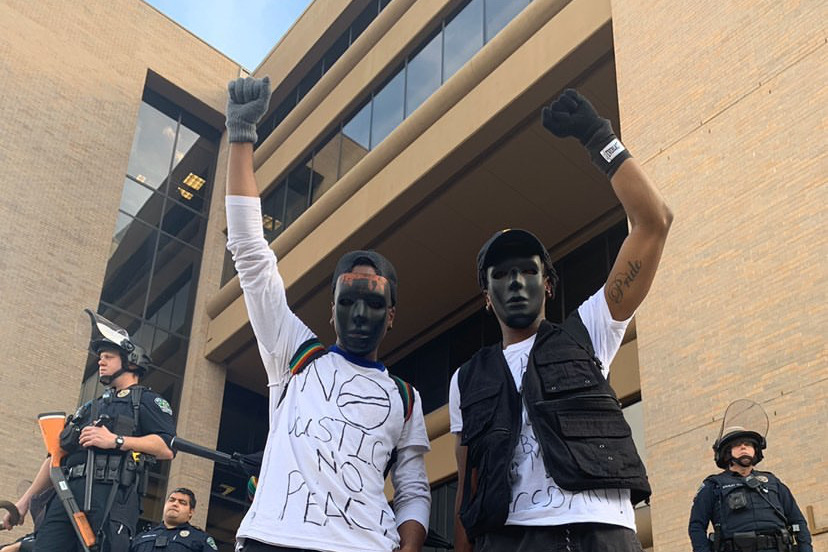 Anthony Evans (left) protests with his twin brother Arthur Evans (right) at the Austin Police Department on May 31 before he was shot with a rubber bullet in his face, causing a severe injury to his jaw. (hebadalu)

Anthony Evans (left) protests with his twin brother Arthur Evans (right) at the Austin Police Department on May 31 before he was shot with a rubber bullet in his face, causing a severe injury to his jaw.

Melanin. This chemical is the natural skin pigment in our bodies that is responsible for the color of our skin.

Elijah McClain was put in a carotid hold and then injected with a 500-milligram shot of ketamine, a powerful sedative, by police on his way to get iced tea on August 24, 2019. He went into cardiac arrest and was declared “brain-dead” less than a week later.

Breonna Taylor was fatally shot at least eight times in her own apartment as a result of a no-knock warrant on March 13, 2020.

George Floyd, pinned down with a knee to his neck for 8 minutes and 46 seconds, was killed during an arrest for allegedly using a $20 counterfeit bill on May 25, 2020.

America continues to struggle with overcoming systemic racism that was woven into the fabric of the nation since it’s founding. The long list of cases involving police brutality and the police shootings of unarmed black men have brought this issue to the forefront in recent months.
For many, the video of Floyd’s killing with a police officer placing his full weight and on his neck was too much to bear, resulting in protests and calls for immediate reform. And the calls for change and improvements have also come to Austin with large groups of people gathering around the downtown police department headquarters in late May and early June.

Akins alumnus Anthony Evans, Class of 2012, experienced police brutality first-hand on May 31. He was shot in the face by a rubber bullet, shattering his jaw. He was in the hospital for about four days and went through two surgeries on the left side of his jaw. He will have a metal wire in his jaw for the next 6 weeks to heal and will have to live with a permanent titanium plate.

“They said my jaw looked like I got hit by a car,” Evans said.

During his time at Akins, he was in the Arts and Humanities Academy and a staffer for The Eagle’s Eye. He also participated in several plays like Hairspray as a backup dancer alongside his twin brother Arthur Evans.

Anthony and Arthur Evans decided to “take a peaceful stand towards the injustice present in the system.”

They started in a gathering near the City of Austin’s Department of Housing building, speaking with the crowd and noticed police officers bearing weapons and ignoring protesters’ questions.

“Things got rowdy after a while, so they started throwing bottles and shooting beanbags into the crowd of people. As I was walking away from the crowd, I was struck in the face with a rubber bullet and my jaw shattered,” Anthony said.

Immediately after getting shot, his first thought was to help a woman in the street as she was in danger of getting shot next.

“I tried to help her so I didn’t really think anything because my face was numb,” he said.

Anthony had to walk eight miles from downtown Austin to William Cannon to get back from the protest as he got separated from his initial ride and his phone was dead.

“I asked some officers further down the road for a ride and was denied a ride or any type of assistance and said they were too busy to help me so I just decided to walk because I was in panic mode to get home safely,” Anthony said.

Many people came together to support Anthony, donating to his GoFundMe campaign, and spreading the word about his story.

Zac Sagay, Anthony’s friend, said that he was surprised by what happened.

“I was in shock and instantly saw myself in him. I had also peacefully protested a day prior and thought, ‘Wow, that could have been me.’ There was also a feeling of disbelief that something like that could happen in Austin, a city that prides itself upon being so progressive. I was also so impressed with how he handled such a traumatic experience,” said Sagay. “He has a beautiful heart and I was instantly inspired.”

Green Tech Academy coordinator, Christina Garcia-Mata, has been at Akins since 2006 and taught Teen Leadership to both Anthony and Arthur Evans. She experienced “a myriad of feelings” when she first heard about Anthony’s encounter with the police.

“I was saddened, angry, worried (about his health), proud of his activism, and a bit in shock,” she said. “I posted his story on social media because I wanted to help bring awareness and hopefully get others to contribute to his GoFundMe page. This family is quite memorable because of the fun-loving energy they each carried.”

Anthony said he reported his incident to the Austin Police Department as soon as he addressed his immediate medical issues.

“People were so quick to respond. Once I really got on social media, I found out that my brother and sister were already working on ways to help me and get my story out there via social media,” he said.

Anthony also said he “wasn’t there to riot or loot or disrespect the police.”

“I was there to simply find out why the cops felt there was nothing that needed to be fixed in the system they work in,” he said.

We should spread love and as much kindness as possible because the world needs more love and less hate.”

This wasn’t Anthony’s first exposure to the police. He said he has been racially profiled before.

During elementary to late middle school, while walking with his cousin to the corner store, he was stopped by the police because someone had called about “suspicious characters” in the area.

“At that point, I kind of just had to see the world for what it was and be aware of my surroundings,” he said.

Sagay, wanting to do a fundraiser, organized a 34-mile walk around the Town Lake trail on June 28 to support Anthony.

The walk was split into 4 portions, with the meeting point of each one being at the hydration/snack station under the Mopac highway near Austin High School.

Those who joined the walk used the hashtag ‘#WeWalkWithAnthony’ to spread awareness and document the event.

Anthony said he protests to “bring light to everyone’s oppression by the system.”

“I see the amount of people coming together to support the movement now and help me get back to the fight for justice,” he said. “We should spread love and as much kindness as possible because the world needs more love and less hate.” 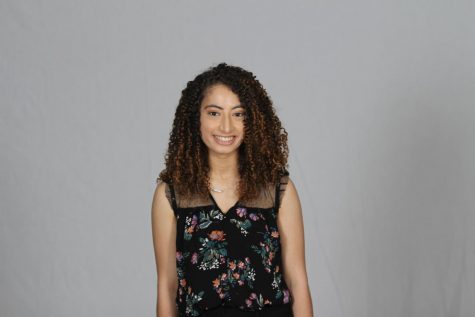 Why do you enjoy being on staff? I love being able to give other people a voice and building my graphic design/journalism skills.

What do you do for fun? I enjoy hanging out with my friends, working out, reading, and hiking.

What are your hobbies? In my free time, I like to paint, sleep in, and explore new places around Austin.