Austin Home prices at an all time high, forcing families to move away towards cheaper areas 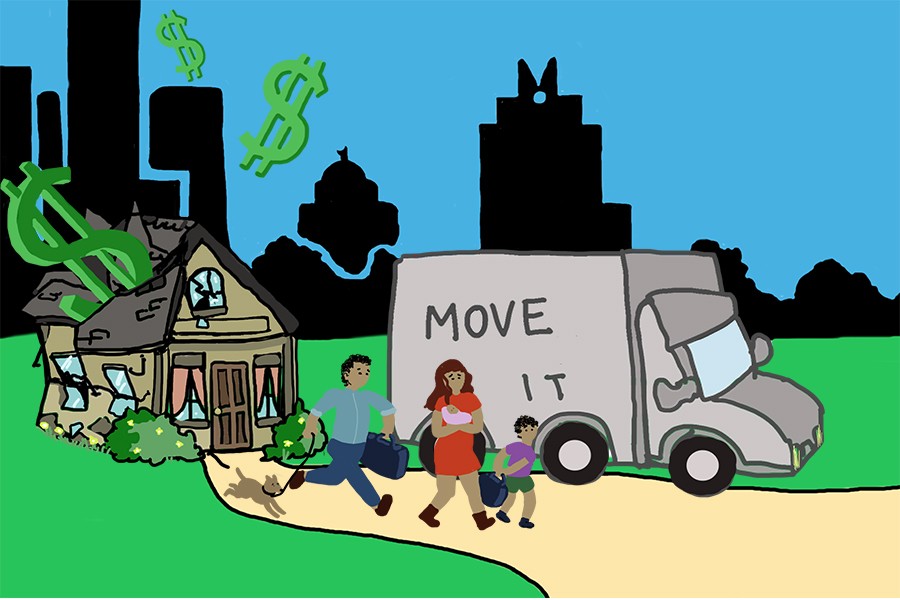 A family moving out of Austin due to high rent prices

From laid-back college town to destination city that tops the lists of hot places to relocate to, Austin has undergone a dramatic transformation in the last 15 years.

According to the U.S. Census Bureau, the population of Austin grew 37.4 percent from 2000 to 2010 and is considered the fastest growing big city in the country.

The lively arts scene, youthful energy and tech jobs the city is known for are often cited as reasons why the city is such a popular place to live right now. And it doesn’t hurt that Austin calls itself the “Live Music Capital of the World.”

We are an Akins High School family, and we don’t want to see anyone go.”

But while young professionals flock to Austin from all over the country, growing pains are becoming evident. A common complaint among long-term Austinites is that all of the success the city appears to be experiencing is not enjoyed by everyone.

While luxury condo towers are sprouting up all over downtown, many lower income people find themselves looking to move away from Austin altogether.

Lack of affordable housing has become such an extreme problem that it was cited as one of the primary causes of a 3,000 decline in student enrollment in the Austin school district over the last three years. And the district recently released a demographics study, predicting the problem will only get worse within the next 10 years.

At the heart of the problem is the way that property tax bills increase when a large influx of wealthier individuals move to town. Property taxes are based off of property value appraisals, which means that when an area becomes more desirable to live in, property tax bills rise.

According to the Austin Board of Realtors, the median price for an Austin-area single-family home increased 10 percent every vyear to $255,000 in March 2015. The average price increased 13 percent to $334,758 during the same time.

This puts home ownership out of reach for many lower income residents. Between 2013 and 2014 the average price of a single family home increased by 8 percent.

Donald Degollado, director of operations and Co-Founder of Frameworks, said most of the people moving to Austin are ones who earn a higher income.

“People with higher incomes are moving into the urban core and changing the landscape from families to young professionals,” Degollado said. “This pressure is causing prices for rentals and home ownership to squeeze out working families.”

Families living in central Austin are moving into either South Austin, or surrounding suburbs such as Kyle, Buda, and Wimberly.

Austin school district teachers, who have an average yearly salary of $47,400, are an example of people feeling the squeeze of rising housing costs.

One of these families is that of Akins math teacher, Natalee Peterson.

Peterson said she loved living just six minutes away from campus, and was disappointed when her family was forced to relocate to Kyle last summer because they couldn’t afford the housing costs any more.

“There was no way to get ahead of it. We sold our house, and found another one that is bigger, on a bigger lot, and for less than what we sold ours for,” Peterson said.

Peterson’s family tried to stay in Austin; however, with the rapid increase of the taxes on their home, the move became inevitable.

“We bought our house in South Austin 8 years ago,” Peterson said. “Our property taxes went up 60 percent, while my salary had gone up 3 percent.”

Peterson was able to keep her children in Austin schools because teachers are given that benefit if they choose it. However, it wasn’t an easy process. The transfer for her daughter, sophomore Abi Peterson, took longer to clear than it should have. Natalee Peterson said she wanted to keep Abi at Akins where she is a member of the band, instead of having to enroll her in the Hays school district.

“It was so incredibly stressful, and not a positive experience,” Peterson said.

Many families are not as fortunate as Peterson’s, and are forced to also remove their children from the school district.

In response, schools in central Austin are experiencing rapid enrollment declines, causing a “donut” effect, where the center of the city is being drained of families with young children who are being pushed to the edges of the city.

Within the next few years however, the enrollment drop is expected to include every school in the district, including Akins.

To help combat these problems, the district held the Austin ISD Showcase on January 9 at the Palmer Events Center. Representatives from each high school set up poster boards and demonstrations to show what they have to offer.

Ryan Poulos, director of communications at the Real Estate Council of Austin, said that despite attempts to boost the opportunities Austin ISD provides, enrollment rates are still declining.

“The school district’s own records show that roughly half of the departures from AISD are due to middle-class families being priced out of the city,” Poulos said.

Enrollment declines can be detrimental to the school district because less students enrolled, means less teachers hired, and thus revenue from the state declines. Revenue helps schools to pay for important teaching resources like lab equipment, sports equipment, and other teaching materials.

This decline will be especially difficult for Akins, due to being accustomed to the past trend of student growth in the past.

“It’s awful. I hate it,” Hosack said. “We are an Akins High School family, and we don’t want to see anyone go. It’s painful.” 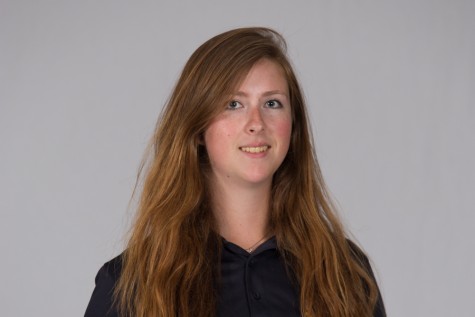 Amanda Livingston, Editor in Chief
Grade: 12th
Academy: New Tech
Year on Staff: 3 years
Why they are on staff: I joined the staff of the Eagle Eye two years ago originally because I wanted to take photos for the newspaper. However over time I wrote more than photographed and my reasons changed. I developed an interest in the journalism field after guest news anchors came and talked to our class, and now it's something I'm looking at doing as a career.
What do you do for fun: I like to watch roller derby and roller skate, and go to live concerts. Other than that I generally am I very calm person in regards to what I like to do. Just simply driving around with my friends or sitting around watching a movie and playing board games is just fine with me.
Plans for after high school: After high school I plan on attending college, hopefully at either the University of Texas or Texas State. I am planning on either majoring in photojournalism and minoring in music, or double majoring in photography and journalism separately and minoring in music. I know after college is done I want to do something involving photography because it's a passion of mine.
Twitter handle: @HeyNamesAmanda
Hidden Talent: I feel like if I have a hidden talent it's writing poetry. I don't do it often but when I do I feel like it turns out pretty well. I also love photography and music, and feel I have at least a slight talent in those areas. 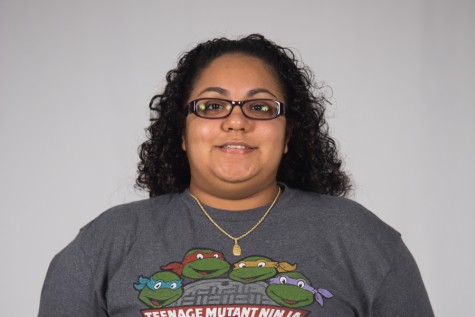 Name: Chelsea Cuevas
Academy: AHA
Year on Staff: 1st
Why they are on staff: I asked to join the newspaper writing because I wanted to improve my writing skills and be interest in interviewing and writing about stories that are amazing from the Eagle's Eye news.
What do you do for fun: I hang out with my family and I sometimes during the weekend I go to the pool at the table and read a book.
Plans for after high school: This summer I worked at Chick-Fil-A for the first time, next year I finish Clifton, also study a driving skills to pass a driver's license and hopefully one day I quit that job, get an interview to work at child care as a teacher assistance.
Hidden Talent: I'm an Artist love doing art, I also enjoy doing writing stories of my own, even about my life in journal.
Leave a Comment