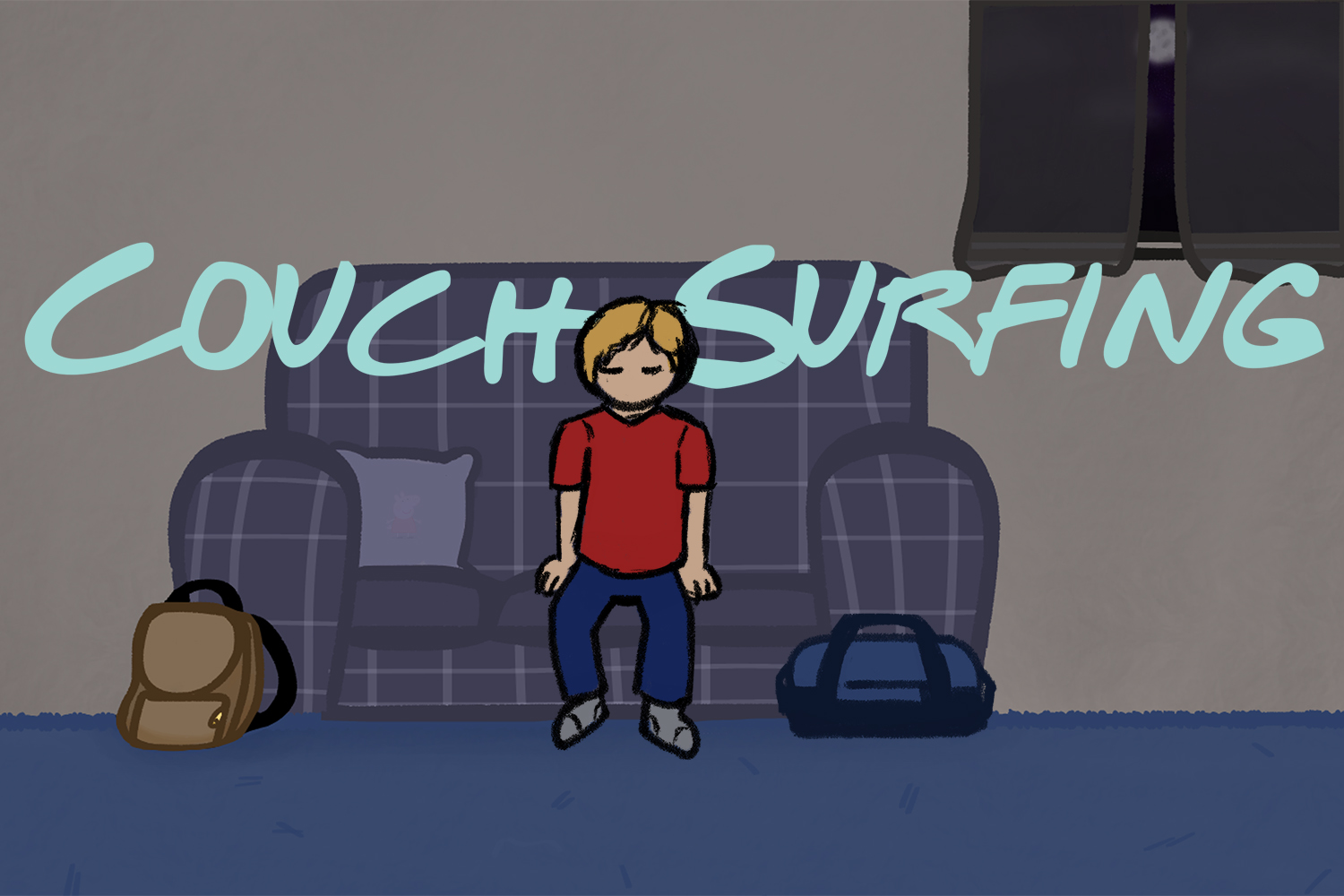 Students homelessness doesn't always mean living on the street. Sometimes it is crashing at a friend's place. (Jamie Bain)

Students homelessness doesn't always mean living on the street. Sometimes it is crashing at a friend's place.

During April of 2018 until the beginning of this school year, senior Reed Henri lived for months having to couch surf to nd a safe place to sleep.

“My mom and I had a falling out. And she felt like it was necessary for me to get out of her living situation; she felt like her situation would be better if I was not in it. So that just made me have to go and somewhere else to be,” Henri said.

Henri, the name changed for privacy, decided it would be best if he lived at his best friend’s house.

“They were very open and very willing to have me come into their home. But, to a certain extent, I started to realize that I was still on my own,” Henri said. “I was living with people that cared for me but I wasn’t their child. I had to go and still do things on my own; be an adult and do things that were kind of out of my comfort zone.”

He spent a great majority of his time filling out job applications and tediously gathering the necessary paperwork required as a person that is under the age of 18. He did not, however, have the support of his parents. His mother did not provide him with his birth certificate or his social security card.

“All of these things cost money. So I had to order my birth certificate, then I needed to go get my state ID to finally start working to the select places that want to hire me,” Henri said. “It just kind of sucked not having the normal family backing that you’re used to because you have to go and find, or go do for your own, or become an adult when you’re not technically ready to be an adult.”

For Henri, it’s a constant balancing act having to worry about taking care of his basic needs while maintaining relationships with friends and keeping on top of his school work.

It has taken a heavy emotional toll on him, he said.

“That dealt heavy on my heart. More than anything,” Henri said. “More than my financials and whatever, because I could take care of myself.

Henri said the situation has left a hole in his heart.

“Your whole life, you grew up with your parents and your family, loving you and helping you,” he said. “But once that snatched away from you, you have almost nothing. So there’s been countless nights where I cried, and countless days where I just went out and I put in a thousand job applications.”

The issue of student homelessness is often misunderstood. America’s Promise, an organization that aims to better the lives of young people, puts it, it’s an issue that’s “hidden in plain sight.

In a study done by America’s Promise, 67 percent of the homeless students surveyed — with ages that ranged from 12 to 18 years of age — said that they were uncomfortable with talking to people at school about their housing situation and other related challenges.

During the 2016-17 school years alone, Texas had the third-highest in the number of enrolled students reported as experiencing homelessness with 111,177 students.

One of the most recent and prominent examples that caused a sudden surge of homelessness in Travis County was the flooding of Onion Creek in 2015. Many lost their homes to the flooding.

“Almost a third of our students that year were flood-impacted,” said campus social worker Meg Scamardo. “And whether their house was completely destroyed, and whatever the city gave them for their home, it could not an ord to get them into another place.”

There are many other factors that contribute to student homelessness. Some can include domestic abuse, eviction, loss of employment, runaway, substance abuse, and mental health.

The first step in helping the student homelessness problem is identifying and setting each one of the students up with a program called Project HELP.

Project HELP — short for Project Hope & Empowerment ~ Leveraging Possibilities — is a district program with the aim to provide homeless students with everything that they need to be able to stay in school and finish their education. One of the major pillars that hold up the existence of Project HELP and other organizations like it is the Federal McKinney Vento Act.

In summary, the McKinney Vento Act is a federal law that states that all homeless students have the right to public education regardless of unstable housing.

One of the major ways that the organization can help is setting up transportation for these students.

“Even if they’re living in Crockett or Travis zoning that they can still go to Akins if that’s where they were last permanently housed,” Scamardo said. “We can get them set up with transportation because a lot of times that is one of their biggest barriers to finishing school is maybe they live in Buda or just a different area of Austin.”

“So they’ll do things like, let’s say a student is 18, working and is kind of on the right track to get their own housing, loan, maybe they can pay a deposit,” Scamardo said. “The program can give them assistance for groceries and or things such as that.”

The assistance that the Diversion Program provides can also be provided with the offices here at Akins.

“We have nonperishable groceries. We have our clothing closet. We also have lovely community partners who just have a heart for helping our homeless students,” Scamardo said. “And we really work with all of our homeless students to create a customized individual plan for their individual needs, and just try to figure out; what is it that they need and help them get those needs met.”

In the end, the school tries the best it possibly can to provide for the needs of our homeless students.

“I wish I could afford to buy them all a place,” Holder said. “For them to have their own home and to be able to help them be independent. But that’s not possible. But I do what I can. I’m always looking for resources.”